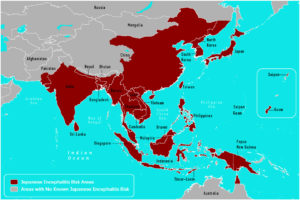 Japanese encephalitis (JE) virus is a viral infection caused by vaccine-preventable RNA viruses belonging to the Flavivirus genus in Asia especially for Southeast Asia and the western Pacific.

Japanese encephalitis virus (JEV) is a flavivirus related to dengue, yellow fever and West Nile viruses, and is spread by mosquitoes. JEV is the main cause of viral encephalitis in many countries of Asia with an estimated 68,000 clinical cases every year.

For most travelers to Asia, the risk for JE is very low. It's estimated less than 1 in a million travelers get Japanese encephalitis in any given year. But the risk varies based on the destination, length of travel, season, and activities. The people most at risk are those who live and work in rural areas, such as on pig farms and in rice fields, where the condition is widespread. Around 75% of cases involve children under the age of 15. Most people infected with JE do not have symptoms or have only mild symptoms. However, a small percentage of infected people develop inflammation of the brain (encephalitis), with symptoms including sudden onset of headache, high fever, disorientation, coma, tremors and convulsions. The case-fatality rate among those with encephalitis can be as high as 30%. Permanent neurologic or psychiatric sequelae can occur in 30%–50% of those with encephalitis. Currently, 24 countries in the WHO South-East Asia and Western Pacific regions have endemic JEV transmission, exposing more than 3 billion people to risks of infection. There is no cure for the disease. Treatment is focused on relieving severe clinical signs and supporting the patient to overcome the infection. To prevent getting sick from JE, use an EPA-registered insect repellent, wear long-sleeved shirts and long pants, and get vaccinated.

Also, Safe and effective vaccines are available to prevent JE. WHO recommends that JE vaccination be integrated into national immunization schedules in all areas where JE disease is recognized as a public health matter.

When it comes to Thailand, Risk is present throughout the country. Outbreaks occur mostly in the northern region (Chiang Mai valley) with sporadic cases reported from the areas of Sukhothai, the suburbs of Bangkok and Phitsanulok, as well as from the southern regions of the country. Transmission occurs all year with seasonal peaks from May to October in northern areas.

This disease was first recognized in Japan. Currently, it is found widely in East Asia, Southeast Asia and South Asia. On our earth, 24 countries in the WHO South-East Asia and Western Pacific regions have JEV transmission risk, which includes more than 3 billion people. China, Korea, Japan, Taiwan, and Thailand have had outbreaks in the past, but they have mainly controlled the disease through vaccination. In Thailand, the high incidence is found where rice and pig farms coexist, especially in Mae Hong Son, Mukdahan, Kamphaeng Phet, Samut Sakhon and Nan provinces. Vietnam, Cambodia, Myanmar, India, Nepal, and Malaysia still be possible of an occasional epidemic. There have been cases in northern Australia, but health authorities in mainland Australia consider the disease to be low-risk. The United States has seen a few reports of Japanese encephalitis in people who have traveled to places in which the disease is active.

In terms of the risk, Long-term travelers, persons involved in outdoor recreational activities or on work assignments going to endemic areas are at risk, especially those visiting rural areas, farms, rice fields and irrigation areas. Children under 15 years of age seem to particularly susceptible to the infection. Outbreaks typically occur during or shortly after the rainy season in temperate regions and year-round in tropical regions (peak transmission during summer months). JEV is transmitted to humans through bites from infected mosquitoes.

To sum up, the risk is the highest during the transmission season, but this varies from place to place in the following ways:

Most JEV infections are mild (fever and headache) or without apparent symptoms, but very few people have severe symptoms. The key facts are listed below:

Unfortunately, no specific treatments have been found to benefit patients with JE, but hospitalization for supportive care and close observation is generally required. Normally, Treatment is symptomatic. Rest, fluids, and the use of pain relievers and medication to reduce fever may relieve some symptoms. Thus, it is essential to visit a doctor when you suspect it. 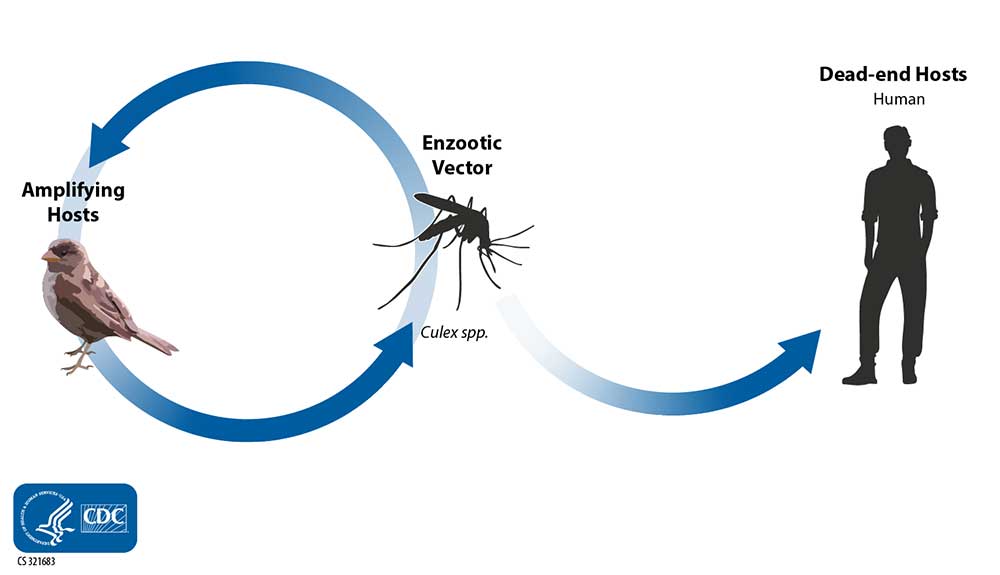 JE vaccine is recommended for persons moving to a JE-endemic country to live, longer-term (e.g., 1 month or longer) travelers, and frequent travelers to JE-endemic areas. JE vaccine also should be considered for shorter-term (e.g., less than 1 month) travelers with an increased risk of JE based on planned travel duration, season, location, activities, and accommodations. Vaccination also should be considered for travelers to endemic areas who are uncertain of the specific duration of travel, destinations, or activities. WHO recommends having strong JE prevention and control activities, including JE immunization in all regions where the disease is a recognized public health priority, along with strengthening surveillance and reporting mechanisms. Even if the number of JE-confirmed cases is low, vaccination should be considered where there is a suitable environment for JE virus transmission. There is little evidence to support a reduction in JE disease burden from interventions other than the vaccination of humans. Thus, vaccination of humans should be prioritized over vaccination of pigs and mosquito control measures.

Normally, vaccination is given as a two-dose series, with the doses spaced 28 days apart. Adults aged 18–65 years can get the second dose as early as 7 days after the first dose. The last dose should be given at least 1 week before travel.

Reactions to the vaccine are generally mild and include pain and tenderness, mild headaches, myalgia (muscle aches), and low-grade fevers.

Healthcare providers are encouraged to report all adverse events that might be caused by vaccination to the appropriate government organizations.

Finally, for your information, the current US CDC recommendation about the use of JE vaccine in travelers is attached below. They divide into 2 categories;

2 JE vaccine should be considered for the following persons:

2.1 Short-term (<1 month) travelers to endemic areas during the JE virus transmission season, if they plan to travel outside an urban area and their activities will increase the risk of JE virus exposure. Examples of higher-risk activities or itineraries include 1) spending substantial time outdoors in rural or agricultural areas, especially during the evening or night; 2) participating in extensive outdoor activities (such as camping, hiking, trekking, biking, fishing, hunting, or farming); and 3) staying in accommodations without air conditioning, screens, or bed nets.

2.2 Travelers to an area with an ongoing JE outbreak.

2.3 Travelers to endemic areas who are uncertain of specific destinations, activities, or duration of travel.

JE vaccine is not recommended for short-term travelers whose visit will be restricted to urban areas or times outside of a well-defined JEV transmission season.

Please feel free to contact us if you have any questions